fictional story that takes place on 9/11 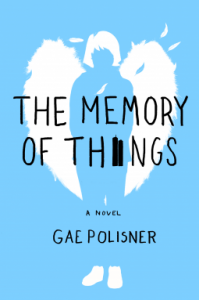 The Memory of Things was so difficult to rate because I wanted to love it more than I did; however, a couple aspects of the story just didn't work for me. I should have been able to whip through this book in a couple of sittings, but a lack of time prevented me from accomplishing that.

The Memory of Things presented me with a different kind of storytelling - it's told in alternating POVs between the two main characters, Kyle and the mystery girl. What's really interesting is that Kyle's POV is straight forward, but the girl's POV is told in a lyrical, almost poetic manner which I found that I liked. It added to the mystery and uncertainty of who she is and why she was at the place Kyle found her.

Due to the sensitive subject matter, I felt compelled to rate this at least 4 stars, but I ended up feeling I couldn't do that because it wouldn't be an honest representation of how I feel about the book. As I mentioned earlier, there were things about the story I wish had been different.

On September 11, Kyle is making his way home after the first tower goes down. He comes across an ash-covered girl wearing angel wings. She seems to have amnesia, and Kyle can't just leave her there by herself, so he has her go home with him.

Kyle's uncle, who is disabled, lives with him and his family, and I liked the inclusion of a diverse character who isn't found in many books. Kyle's uncle wasn't disabled just for the sake of including diversity into the story - he had an important role to play in the story. I loved Kyle's relationship with him and how much Kyle looks up to him.

Kyle is an awesome kid who somehow keeps it together throughout the terrifying events of a day that will live in the world's memory forever. He is strong and mature for his age; however I took off one star because I felt there was a lack of depth and emotion overall. There needed to be more. I get that he wasn't sure how to help the girl he found, but I was hoping for more about how these characters were affected by the events of that day.

I also took off a star because the ending felt a little too pat for me. I think it should have had an open ending. I do give major props to Polisner for handling a national tragedy with the sensitivity and care that she did. I still recommend The Memory of Things because you might not be as picky as I was about the way the amount of emotion in the story and the way it ended.